2011 APEC women and the Economy Forum


What: The APEC Women and the Economy Summit is the premier event bringing together senior private and public sector players for a dialogue on fostering women’s economic empowerment among the APEC economies. The dialogue will support a set of policy recommendations that will be delivered to the APEC Economic Leaders’ Meeting, scheduled for November 12-13, 2011 in Honolulu, Hawaii. 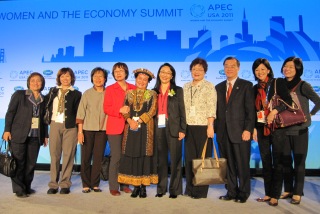 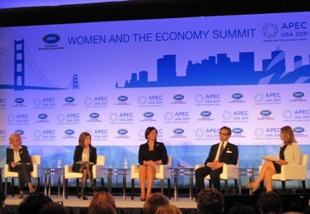 APEC Women and the Economy Summit (WES) is the prominent event bringing together senior private and public sector members for a dialogue on the inclusion of women as an economic growth strategy. It is designed for private sector leaders representing multinational corperaitons, SMEs, academia and civil society as well as for senior government officials responsible for setting international, economic, trade, and SME policies.

The policy framework for discussion at WES encompass four issues: access to capital, access to markets, capacity and skills building, and women’s leadership. To complement the proposed policy framework, the WES also address issues such as innovation, green growth, and technology.

As women-owned businesses tend to be smaller, newer, and less profitable than male-owned businesses, they have greater difficulty accessing capital. In addition, there are many regulations requiring the use of collateral to secure finances, and women often lack fixed assets as sources of collateral. Finally, lack of information and knowledge about lending requirements and practices hinder women business owners’ ability to obtain capital.

Women report feeling less equipped to deal with complex procedures, not having sufficient information on procedures and regulations, and to feel more vulnerable to corruption. The ability of women active in the marketplace to expand their markets (domestically and internationally) can be improved by enhanced business acumen (including mentoring and technical assistance); and better access to information on the regulatory environment and market opportunities (including match-making and technical assistance).

Capacity and skills building is an essential way to develop an economy’s human capital—a key driver of economic competitiveness. However, in many APEC economies only half of the human capital is fully utilized. Multiple empirical studies show that after training, female small business owners and entrepreneurs are able to increase their revenues and profits, scale up, and are better able to move up in the value chain. APEC economies can seek to improve access to information. Women tend to have smaller social and professional networks, which limit their awareness of business opportunities and information on how to handle challenges in operating their businesses.

Globally, there is a lack of representation of women in leadership roles throughout the private and public sector. Whether on corporate boards or in senior-level management positions, women account for a disproportionately smaller share of the overall pie. Studies have identified four major barriers preventing women from moving up to leadership positions: organizational obstacles, including a lack of role models and exclusion from informal networks; work-life balance choices, including travel requirements and long work schedules; institutional mindsets, meaning women are evaluated differently for positions than men; and finally, individual mindsets, due to a lack of motivational interactions, positive reinforcement, and peer and senior-level support.

The High Level Policy Dialogue on Women and the Economy (HLPD) hold on September 16 for private sector leaders, ministers, and high-ranking officials responsible for setting economic, trade, and SME policies. Secretary of State Hillary Rodham Clinton will chair the dialogue.